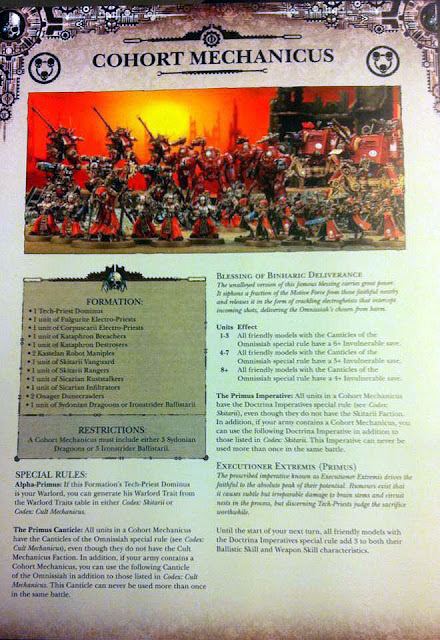 BLESSING OF BINHARIC DELIVERANCE The unalloyed version of this famous blessing carries great power. It siphons a fraction of the Motive Force from those faithful nearby and releases it in the form of crackling electrogheists that intercept incoming shots, delivering the Omnissiah’s chosen from harm.

8 + = All friendly models with the Canticles of the Omnissiah special rule have a 4+ Invulnerable save The Primus Imperative: All units in a Cohort Mechanicus have the Doctrina Imperatives special rule (see Codex: Skitarii), even though they do not have the Skitarii Faction.

In addition, if your army contains a Cohort Mechanicus, you can use the following Doctrina Imperative in addition to those listed in Codex: Skitarii. This Imperative can never be used more than once on the same battle.

EXECUTIONER EXTREMIS (PRIMUS) The proscribed imperative known as Executioner Exremis drives the faithful to the absolute peak of their potential. Rumours exist that it causes subtle but irreparable damage to brain stems and circuit nests in the process, but discerning Tech-Priests judge the sacrifice worthwhile. Until the start of your next turn, all friendly models with the Doctrina Imperatives special rule add 3 to both their Ballistic Skill and Weapon Skill characteristics.
Publicado por Rafa en 20:13
Enviar por correo electrónicoEscribe un blogCompartir con TwitterCompartir con FacebookCompartir en Pinterest
Etiquetas: 40k, Mechanicus, Skitarii 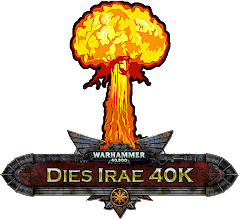